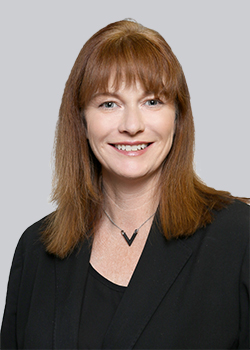 In 2016, after over twenty years as an insurance consumer advocate and partner at Shernoff Bidart Echeverria LLP, Evangeline Fisher Grossman founded this boutique law firm specializing in homeowner property claims.

Mrs. Grossman has litigated homeowner claims since the 1994 Northridge earthquake when she managed over 500 individual cases and multiple class actions on behalf of the Shernoff firm. Her work generated over $400 million in settlements.

Mrs. Grossman is proud to have worked alongside Bill Shernoff in the late 1990s to secure life insurance benefits on behalf of Holocaust survivors. The brilliance of Mr. Shernoff and the efforts of Mrs. Grossman were a catalyst for the establishment of ICHEC which was a settlement process for all survivors worldwide to obtain reparations. Thanks to their efforts survivors received hundreds and hundreds of millions of dollars in long overdue compensation. A documentary film “On Moral Grounds” recounts Mr. Shernoff and Mrs. Grossman’s journey for justice.

Her next remarkable pursuit occurred in the mid-2000s when Mr. Shernoff and Mrs. Grossman took on Blue Cross and Blue Shield for post claims underwriting. It was at this juncture Mrs. Grossman and Mrs. Faxon met as their respective firms co-ventured these important class actions. In addition to recovering hundreds of millions of dollars for their clients, the cases lead to the inclusion of provisions in Obama Care to ban health insurance companies from canceling coverage and/or not affording coverage due to preexisting conditions.

Mr. Shernoff and Mrs. Grossman then turned their attention to helping senior citizens who were targeted by unscrupulous salespersons to purchase unsuitable annuity products. Due to their representation this unfair business practice was scrutinized, industry changes occurred and many seniors were compensated for the advantages taken.

Regardless of the groundbreaking litigation Mrs. Grossman has handled over the years she never lost sight of her true talent which is litigating homeowner property claims.

In 2013, Mrs. Grossman noted that dozens of policyholders were calling weekly with water losses their insurance companies refused to honor. Many of the requests for representation involved repair costs well under $100,000. Always reinventing herself to address the next egregious injustice, Mrs. Grossman began to litigate these water loss claims because she knew that if she did not the carriers would have an unfettered pass to act in bad faith. Little did Mrs. Grossman know that her decision to help this often unrepresented segment of consumers would result in her becoming the preeminent bad faith water loss attorney in all of California.

Given her background handling Holocaust and annuity cases, Mrs. Grossman next decided to advocate on behalf of senior citizens experiencing homeowner claims. Mrs. Grossman was the first to file lawsuits against the big insurance carriers for financial elder abuse in addition to bad faith.

In late 2017, Mrs. Grossman teamed up with Mrs. Faxon, her co-counsel from the 2006 Blue Cross/Blue Shield class actions, to run Evangeline Fisher Grossman Law. Since the firm’s inception Mrs. Grossman has recovered millions on behalf of individual clients.

Mrs. Grossman is known throughout California as the number one water loss attorney. In addition, she is also regarded as the best selection for insureds who have suffered a wildfire loss.